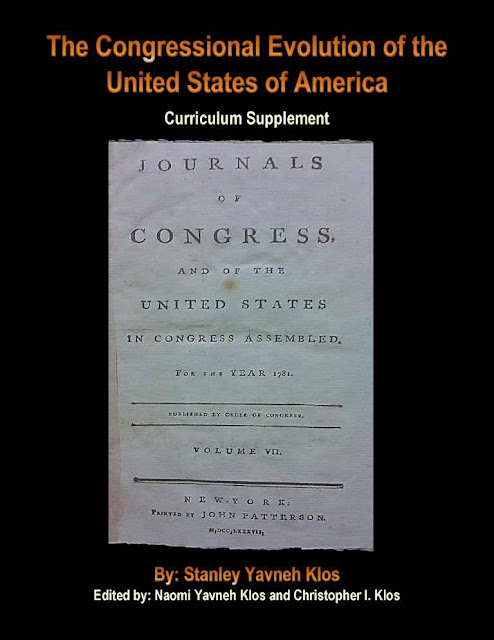 In most history textbooks, compilers do enumerate the differences between the current executive office of U.S. President and Commander-in-Chief with the presidential office that once presided over the Continental and Articles of Confederation Congresses. The opinion, however, that these “Presidents of Congress” were actually United States “Heads of State” is not addressed in American history texts. Moreover, the examination of the similarities and differences between the Continental Congress, United States in Congress Assembled and the current United States Congress is also deficient of thoughtful studentship.

The Congressional Evolution of the United States of America (CEUS) curriculum has been specifically designed to address these and key 1774-1790 political incongruities, which ultimately gave rise to the Congressional call for “…a Convention of delegates … to be held at Philadelphia for the sole and express purpose of revising the Articles of Confederation ...” The curriculum also addresses the Delegates decision to scrap the Articles of Confederation, frame the current United States Constitution and Congress proposing, on September 25, 1789, twelve constitutional amendments for States’ ratification consideration.

The CEUS curriculum addresses this contradiction in its module titled: Debate: Which State is the first U.S. State? Here, students are provided with primary sources demonstrating that New Hampshire’s United Colonies Continental Congress Delegates were the first to vote for Independence on July 2, 1776, while Virginia was the “First State” to ratify the Articles of Confederation on December 16, 1777,” and Delaware was the “First State” to ratify the current U.S. Constitution on December 7, 1787. Students are then asked:
In addition to releasing the Congressional Evolution of the United States curriculum, we are in the process of creating 20 new CEUS Presidential Series videos for www.uspresidency.com. Four of the videos, First UCCC President Peyton Randolph, Second UCCC President Henry Middleton, Third USCA President John Hanson and Fifth USCA President Thomas Mifflin are completed and posted on this website.

Finally, many of our former visitors may be wondering what happened to the America’s Four Republics concept unveiled at the Annapolis Continental Congress Festival in 2012. No reservations, the scholarship is sound but the pedagogy was too controversial for the primary and secondary educational systems in the United States. The Congressional Evolution of the United States Curriculum does address the possibility of different U.S. republics in its second module Challenge: Did the United Colonies Continental Congress govern as a Republic?, which provides ample primary sources for students to arrive at their own conclusions.

As always comments are welcomed, especially from students. They can be submitted by email to: stan@johnhancock.org. 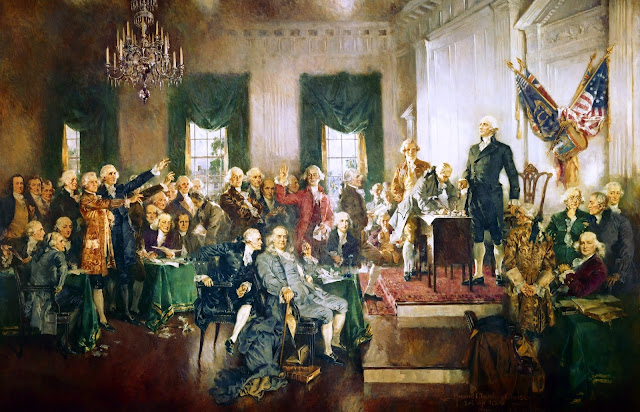 
The United States Continental Congress (USCC) was formed by 12 colonies with the passage of the Resolution for Independency on July 2nd, 1776 and expired on February 28th, 1781, with the Articles of Confederation’s enactment on March 1st, 1781. There was no constitution and the republic was governed under the acts passed by the Continental Congress with each State having one vote in quorums as small as seven member States. Only one delegate was required to have a State’s vote tallied in Congress. John Hancock and George Washington served, respectively, as the republic's first United States Continental Congress President and Commander-in-Chief;

The United States in Congress Assembled (USCA) was formed by 13 States with the Articles of Confederation’s enactment on March 1st, 1781, and expired on March 3rd, 1789, with the implementation of the current U.S. Constitution on March 4th, 1789. The republic was constitutionally governed under Articles of Confederation with state quorums on important matters requiring nine members with a two delegate minimum present in Congress per State. All constitutional changes required the unanimous approval of the 13 member States. Samuel Huntington and George Washington served, respectively, as the republic's first United States in Congress Assembled President and Commander-in-Chief; 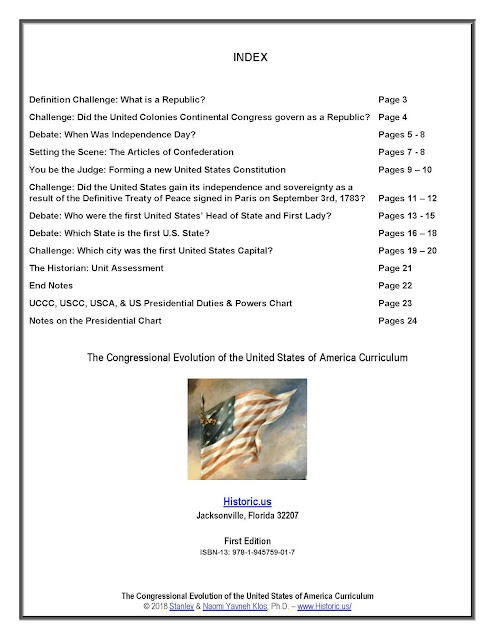 Definition Challenge: What is a Republic? 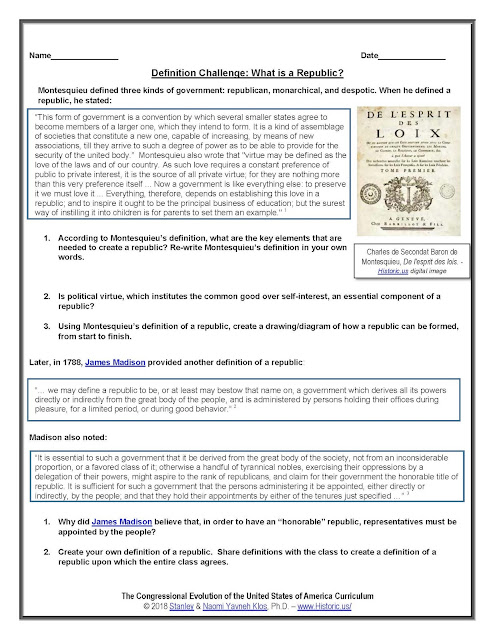 Challenge: Did the United Colonies Continental Congress govern as a Republic? 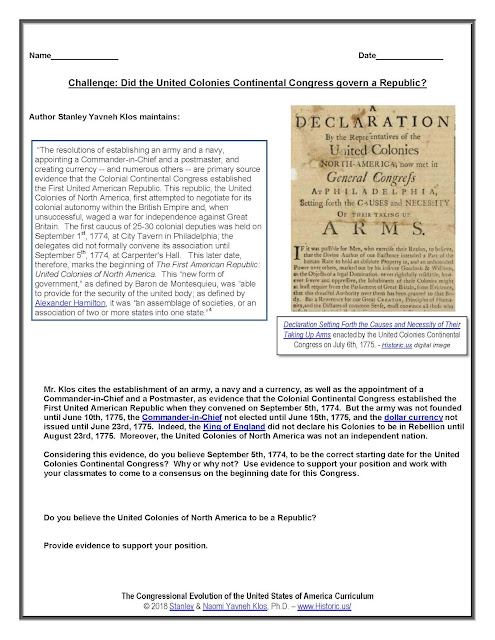 Debate: When Was Independence Day? 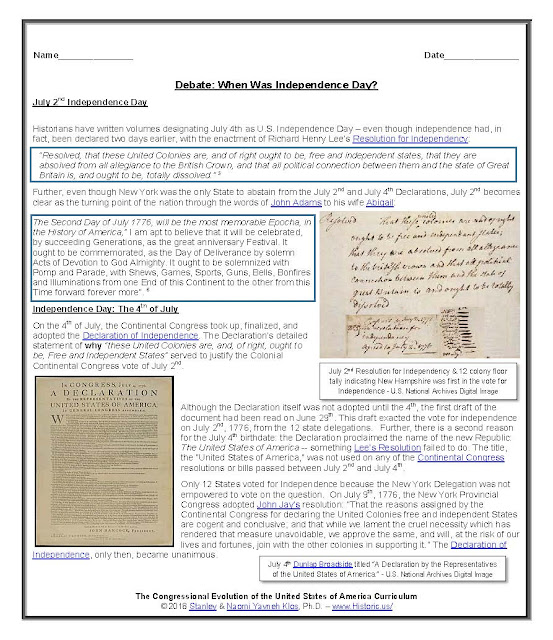 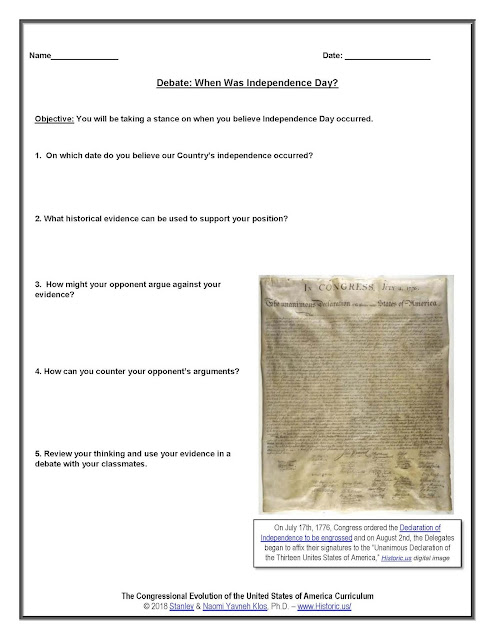 Setting the Scene: The Articles of Confederation 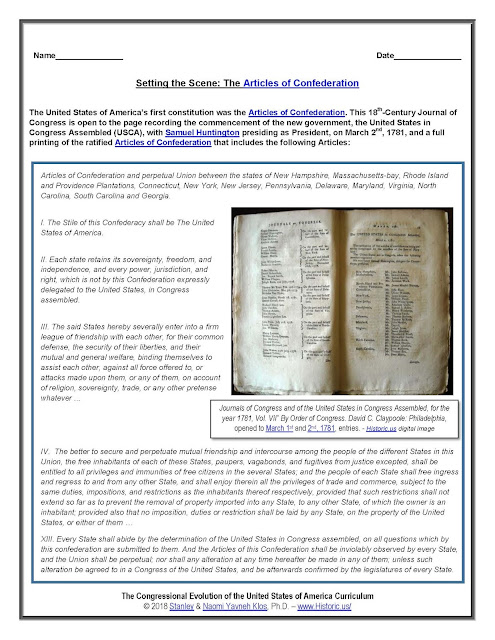 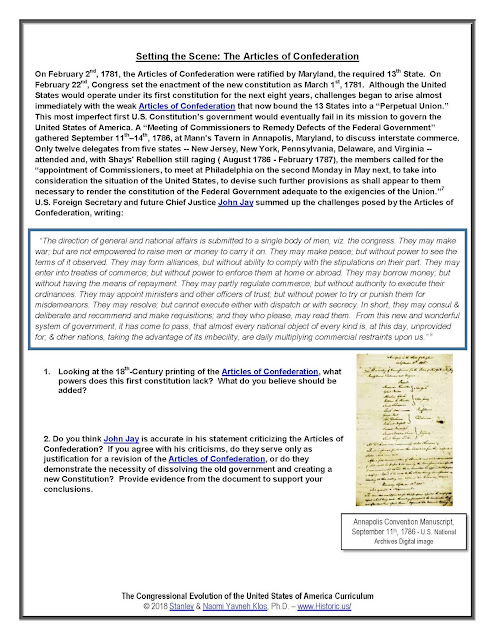 You be the Judge: Forming a new United States Constitution 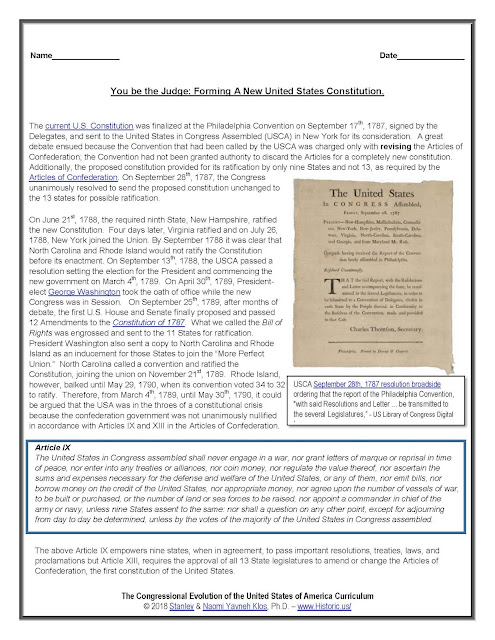 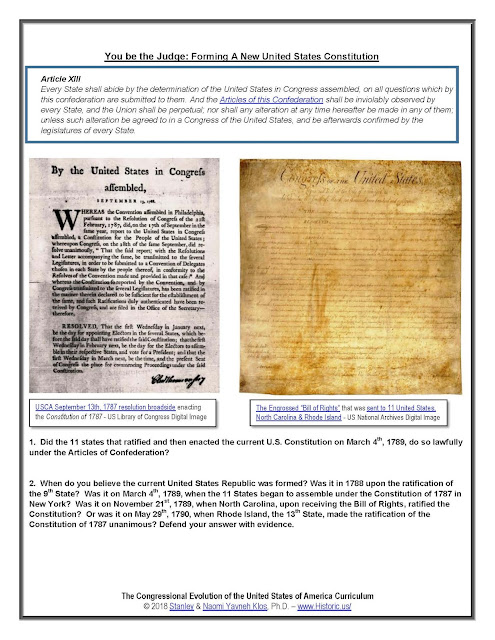 Challenge: Did the United States gain its independence and sovereignty as a result of the Definitive Treaty of Peace signed in Paris on September 3rd, 1783? 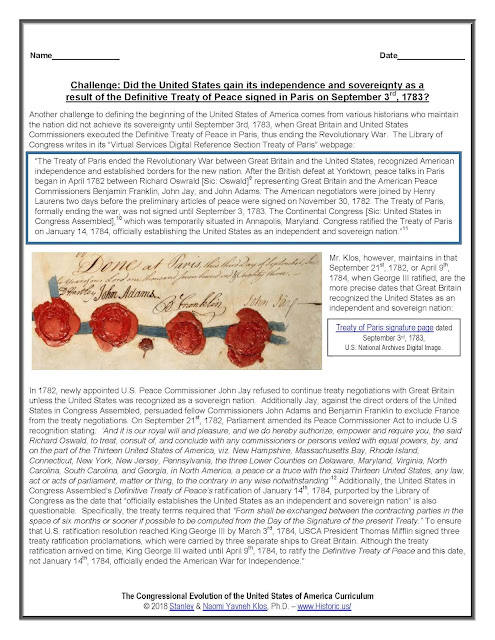 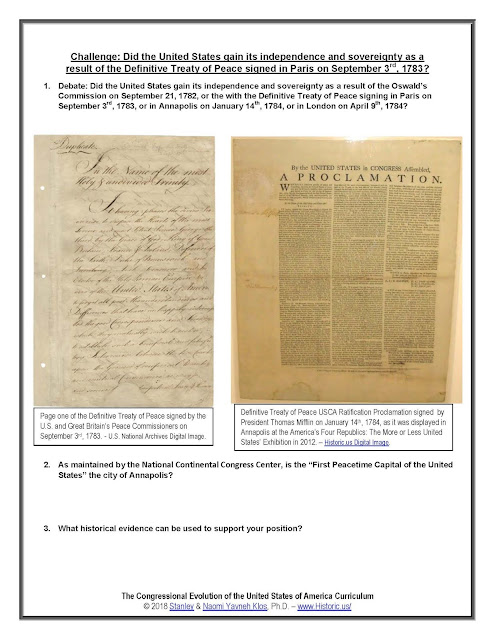 Debate: Who were the first United States’ Head of State and First Lady? 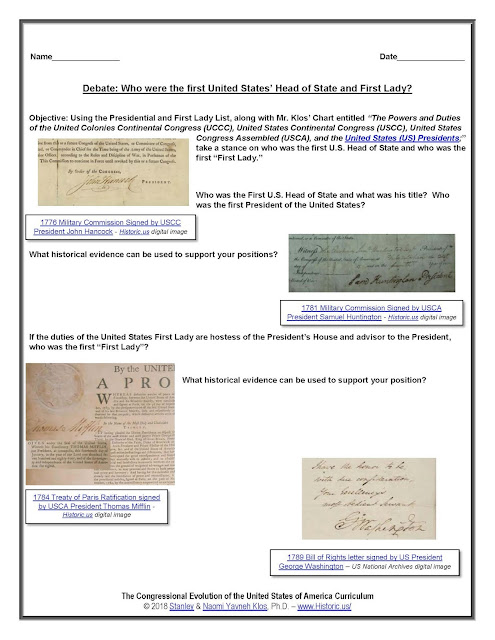 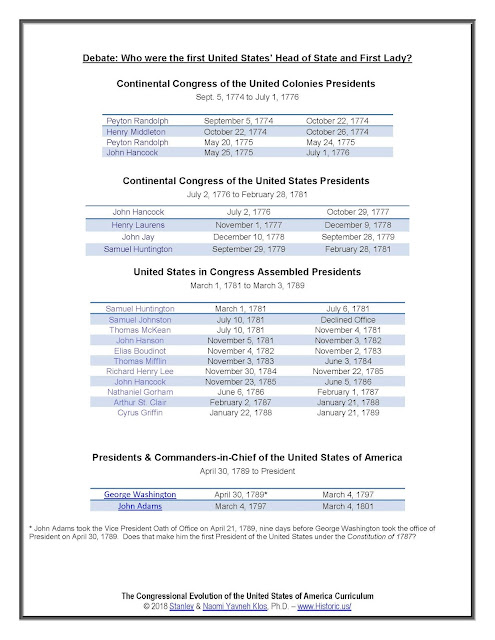 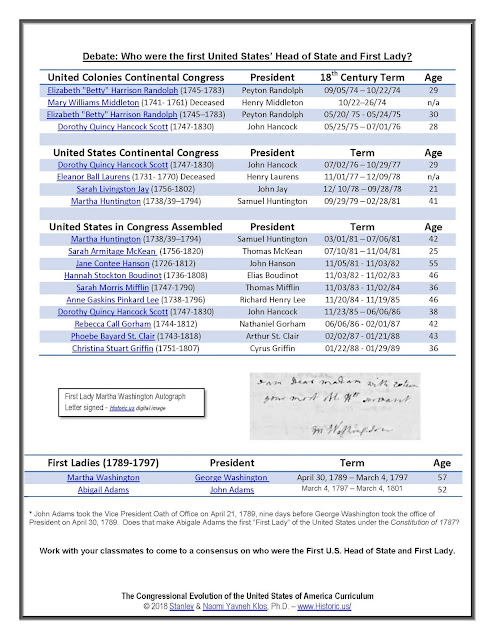 Debate: Which State is the first U.S. State? 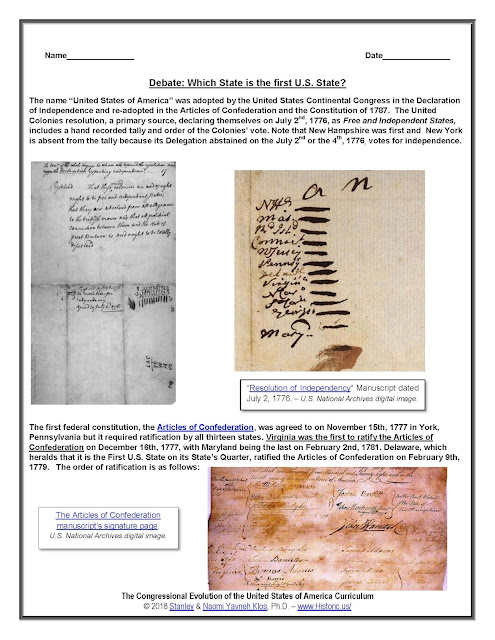 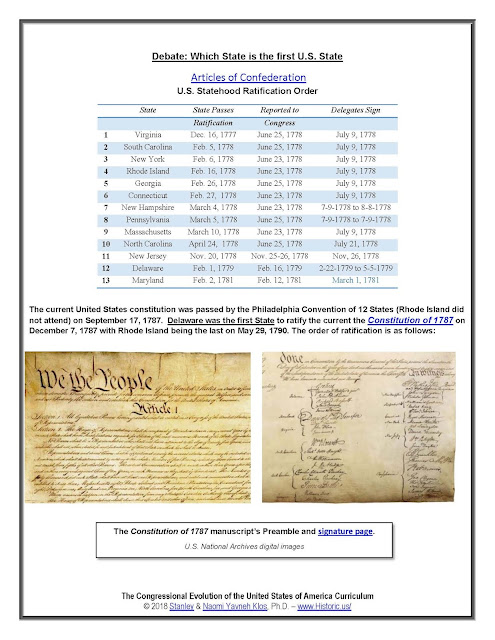 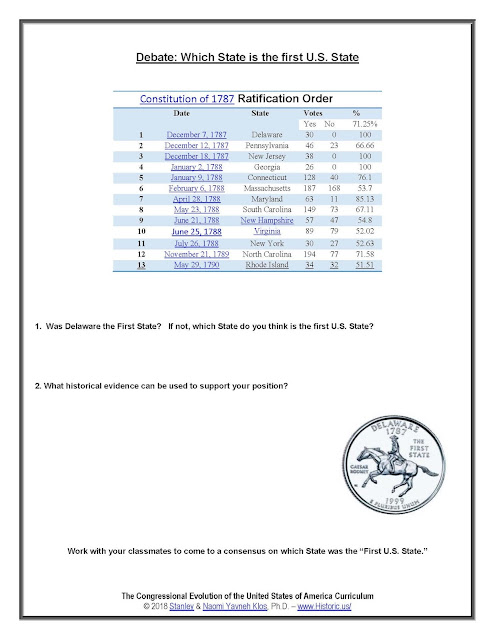 Challenge: Which city was the first United States Capital? 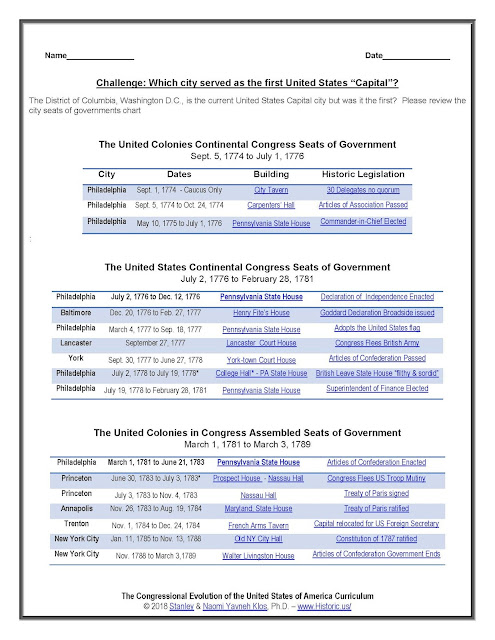 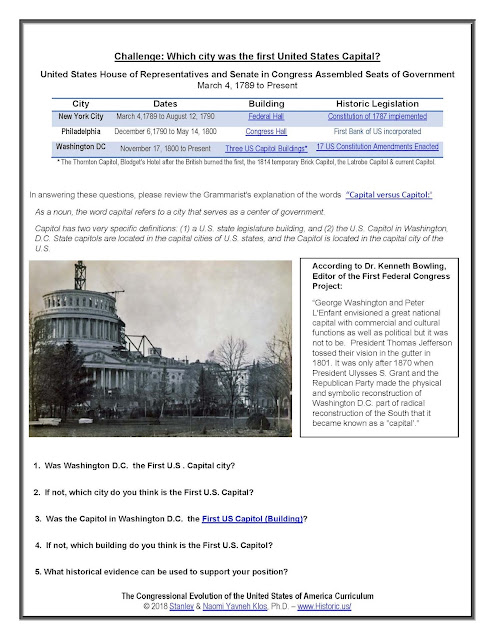 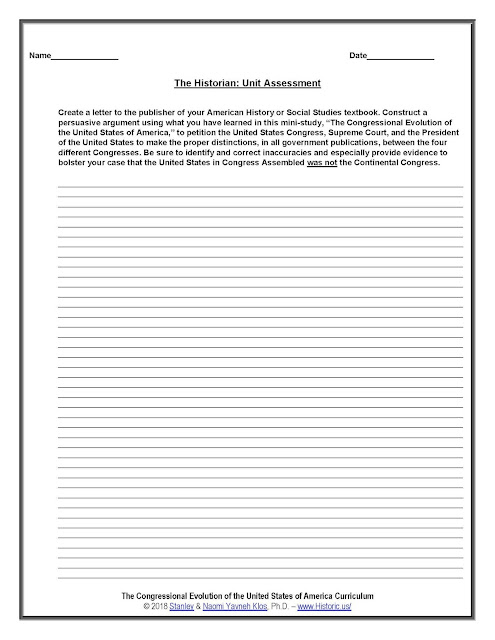 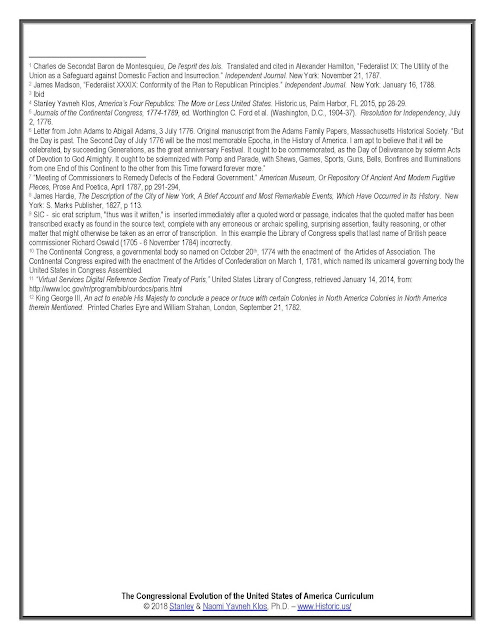 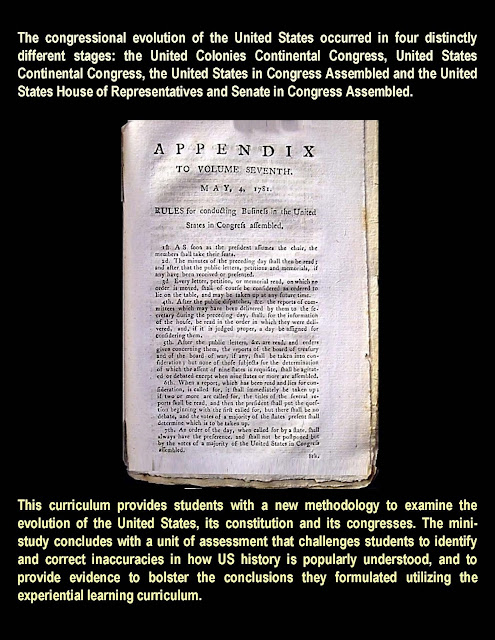