21st President of the United States

Chester Alan Arthur was born on October 5, 1829 in Fairfield, Vermont. His father, William Arthur, was an Irish-born Baptist minister and schoolteacher, and his mother, Malvina Stone Arthur, was born in New Hampshire. The Arthur’s had five daughters and two sons, of whom Chester was the eldest son.

William Arthur was an eloquent preacher and moved constantly from one town to another. The family lived in several towns in Vermont and northern New York before they moved to Saratoga County, New York, in 1839. Chester attended an academy at Union Village (now Greenwich), New York. In 1844, the Arthur’s moved to Schenectady and Chester was admitted to Union College. Chester’s father had taught him Latin and Greek and even though he was only 15, he was admitted to the college as a sophomore. Chester began to teach during the long winter vacations, because his father could not help him financially. After graduating near the top of his class at 18, he continued to teach at North Pownal, Vermont and in 1852 he became the principal of the academy at Cohoes, New York while studying law at home. He joined the law office of Culver and Parker in New York City to continue his training and was admitted to the bar in 1854. He gained a reputation as a supporter of civil rights for blacks, and in 1855 won a case guaranteeing the rights of blacks to ride streetcars in New York City.

In 1856, he formed his own law firm in the Wall Street district. To build up his practice, he joined clubs to make acquaintances. He became an active member in the ranks of the newborn Republican Party and soon had friends in prominent literary and political circles. He could speak well on literature, politics or fishing which happened to be his only sport. The young Arthur was a striking figure, tall, with black eyes and brown hair. He went to the best tailors, wore the latest fashions and was considered well informed and amusing. He fell in love with Ellen Lewis Herndon, of Fredericksburg, Virginia, who was living in New York City with her mother. Her father, Captain William Lewis Herndon, was an explorer of the Amazon who had died a heroic death in the Caribbean after saving many lives. Ellen and her mother belonged to a prominent social group. The couple was married on October 25, 1859 and they had three children: William Lewis Herndon Arthur (1860-1863); Chester Alan Arthur (1864-1937); and Ellen Herndon Arthur (1871-1915). 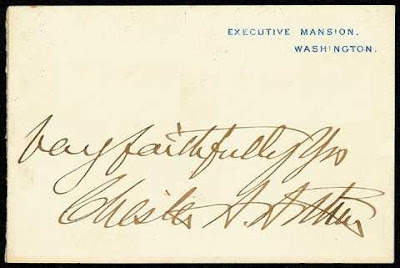 In 1860 Arthur campaigned in New York City for presidential candidate Abraham Lincoln. He also worked for the reelection of Edwin D. Morgan as Governor of New York, and when Morgan won, he appointed Arthur engineer in chief of his military staff, which was an honorary post. At the outbreak of the Civil War in 1861, Morgan asked Arthur to take over the duties of quartermaster general in New York City. The post involved supplying barracks, food, uniforms, and equipment to thousands of troops who passed through the city. He supervised the equipping of more than 220,000 volunteers before 1863, when he resigned after a Democrat was elected governor.

After his return to private life, Arthur resumed his law practice and remained active in the Republican Party of New York, making himself indispensable to the political machine run by U. S. Senator Roscoe Conkling. The political machine organized voters for the support of a candidate and dedicated loyal workers were rewarded with government jobs in return for their services to the “machine”. In 1871, Conkling persuaded President Ulysses S. Grant to appoint Arthur as collector of customs for the Port of New York. This was a great political appointment for Arthur, and he became the undisputed political leader of New York City. In 1877, President Hayes who had pledged civil service reform ordered an investigation of the customhouse. Arthur and two aids were asked to resign and they refused. However, in the summer of 1878, Hayes fired Arthur, giving the customs job to someone else that the Senate had later approved. Arthur once again returned to New York City and to his law practice.

In 1880, the Republican Party was split into two factions, the Stalwarts, strong believers in party loyalty above all else, and the Half-Breeds, who believed in minor political reforms. At the Republican National Convention, both factions were so evenly matched that a candidate could not gain the necessary majority for nomination. The deadlock in the convention lasted until the 36th ballot, when James A. Garfield was unexpectedly nominated. To make sure of the Stalwarts aid in the election, the convention nominated Arthur for vice president. Garfield won the election and Arthur took the Senate chair, but he did not lose his interest in New York politics.

After the election, the split in the Republican Party widened. Garfield made appointments, ignoring Conkling’s political machine. Conkling and New York’s other Senator, Thomas C. Platt, resigned from the Senate in protest to Garfield’s appointments. Arthur supported the New York Senators and accompanied them to Albany to convince the state legislature to give them a vote of confidence by reappointing them to the Senate. Despite their pleas, the legislature did not reappoint the two men. Conkling and Plat never again held public office.

In the middle of this political conflict, Charles J. Guiteau, a crazed office seeker, shot President Garfield on July 2, 1881. Garfield died eleven weeks later, on September 19, 1881. During the weeks were Garfield lingered between life and death, Arthur remained in seclusion as popular indignation against the Stalwarts ran high.

On September 20, 1881, the morning following Garfield’s death, Arthur took the oath of office at his home in New York City. His record of party loyalty greatly handicapped him when he became president. Many Americans regarded him as little more than Conkling’s puppet. His simple and sincere inaugural address helped to reassure the people. He came out strong in support of civil service reform in his first address to congress. In 1883 he signed the country’s first civil service law, the Pendleton Act, setting up the civil service commission to conduct examinations for office holders. His qualifications for the presidency were excellent. He was an experienced administrator and he had tact and common sense. As a lawyer, he was well versed in constitutional law.

Perhaps because of the influence of his heroic father-in-law, Arthur has been called the Father of the American Navy. He took a personal interest in modernizing and expanding it. The Navy had declined steadily after the Civil War and in 1882, Congress appropriated money for the nation’s first all-steel vessels. This was a modest first step in making the United States a major force in naval power.

Although he was secretly suffering from Bright’s disease, an incurable kidney ailment, Arthur hoped to be nominated for a second term as president. Unfortunately, that did not happen and the convention of 1884 nominated Blain. In the general election, Blaine lost to Grover Cleveland, the Democratic candidate. After turning over the White House to Cleveland on March 4, 1885, Arthur again resumed his law practice in New York City. Shortly afterward he became ill and died in 1886.