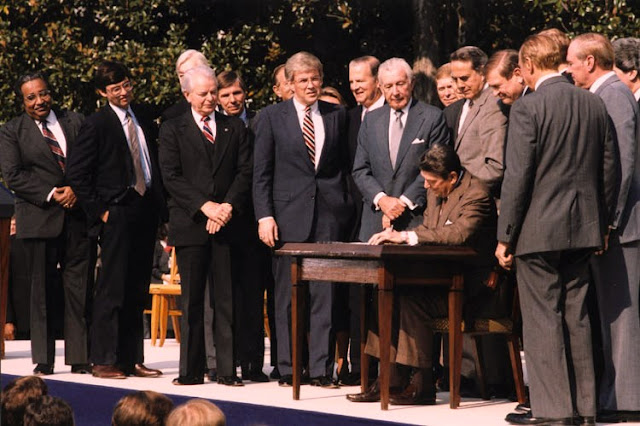 40th President of the United States

Draft of Ronald Reagan speech which included the line "Mr. Gorbachev, tear down this wall!" This draft contains handwritten edits and comments supplied by the National Security Council. Copy of handwritten Reagan note to Andropov regarding the arms reduction process -- Courtesy of: National Archives and Records Administration 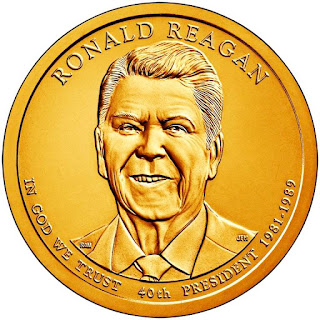 Ronald Wilson Reagan was born on February 6, 1911, the second of two sons of Nelle Wilson and John (Jack) Edward Reagan in Tampico, Illinois. His Irish-American father was a Democrat, know for his outspoken opposition of racial bigotry. The family settled in Dixon, Illinois when Ronald was 9 years old. His mother taught him to read at an early age. He became known by the nickname “Dutch”. In high school he professed an interest in three factors that would dominate his life – sports, drama and politics. Working his way through Eureka College, he earned a BA in economics and sociology in 1932. A 1937 screen test won him a contract with Warner Brothers through which he would appear in over 50 films before moving on to a television career. He became the host of the popular television series “Death Valley Days” and was spokesman for the General Electric Company. Reagan served six terms as president of the Screen Actors Guild.

In 1940 Reagan married actress Jane Wyman. They had one daughter, Maureen and adopted a son Michael in 1945. They were divorced in 1948. In 1952, he married Nancy Davis who was also an actress. Ronald and Nancy had two children, Patricia and Ronald.

Students and Teachers of US History this is a video of Stanley and Christopher Klos presenting America's Four United Republics Curriculum at the University of Pennsylvania's Wharton School. The December 2015 video was an impromptu capture by a member of the audience of Penn students, professors and guests that numbered about 200.

A member of the United States Army Air Corps from 1942 to 1945, he was rejected for active duty because of poor eyesight and spent the war years narrating training films. He was discharged in 1945 with the rank of captain.

Reagan was originally a Democrat and an admirer of Franklin Roosevelt. Throughout the 1950’s his policies and ideals moved toward conservatism and he changed his registration to Republican in 1962. With support of businessmen and conservative backers, Reagan ran for Governor of California in 1966. He easily defeated incumbent Democratic Governor Edmund “Pat” Brown and served two terms. During this time he became a national political figure. When he left the office of Governor of California, the state budget showed a $550 million surplus.

Reagan made the decision to seek the Republican nomination for the Presidency of the United States in 1980. Mentioned as a presidential contender in every campaign since 1968, Republican rivals thought him too old to be a force. With well-financed, loyal support, he swept through the primaries and secured the Republican presidential nomination at the Convention. He chose George Bush to be his running mate. With voters troubled by inflation and the fact that Iran had been holding American hostages for the past year, the Republicans were swept into office, not only the Presidency, but the Senate and House providing a bipartisan conservative majority as well. Reagan won 489 electoral votes to 49 for incumbent President Jimmy Carter. On January 20, 1981, Reagan took office. Sixty-nine days later on March 30th he survived an assassination attempt by John W. Hinckley, Jr., recovering quickly and returned to duty. His popularity soared. Dealing skillfully with Congress, Reagan was able to obtain legislation to stimulate economic growth, curb inflation, increase employment, and strengthen the national defense. He set on a course of cutting taxes and government expenditures and refused to deviate from it even when the strengthening of defense forces led to a large deficit.

During his first term in office Reagan pursued a new direction to get the government off the backs of the people and not spending more that it took in. The Reagan economic policy, known as ‘Reaganomics” was doubtful when in 1982-83 a severe recession diminished its appeal. Public opinion indicated a growing conviction that previous tax cuts had benefited the rich. 1982 saw the Nation’s unemployment rate the highest in 40 years. Reagan instrumented an overhaul of the income tax code, eliminating many deductions and exempted millions of people with low incomes in 1986. He was able to get Congress to approve a program to increase defense spending and budget tax cuts. The Nation began to enjoy its longest recorded period of peacetime prosperity without recession or depression. This strong economic recovery was key to Reagan winning a landslide re-election victory in 1984 against Democratic challengers Walter Mondale and Geraldine Ferraro.

Reagan’s approach to foreign policy was to achieve “peace through strength”. He increased defense spending by 35%. He sought to improve relations with the Soviet Union. In March 1983 he announced his Strategic Defense Initiative, which became know publicly as Star Wars. This was perceived by the Soviets as a threat. Tense meetings with Soviet leader Mikhail Gorbachev resulted in the negotiation of a treaty eliminating intermediate-range nuclear missiles. Reagan also declared war on international terrorism. US Marines were sent to Lebanon in late 1982 after heavy casualties suffered by the Marines in the bombing in Beirut raised anxieties. When evidence was brought forward that Libya was involved in an attack on American soldiers in a West Berlin nightclub, Reagan sent American bombers to Libya. He likewise ordered naval escorts in the Persian Gulf, maintaining the free flow of oil during the Iran-Iraq war. Adhering to principles from his early life pertaining to Communism, Reagan gave also his support to anti-Communist insurgencies in Central America, Asia and Africa. In late October 1983, troops were ordered to invade the Caribbean Island of Grenada to overthrow the country’s anti-American dictatorship. The CIA worked openly to overturn the Sandinista regime in Nicaragua.
The damaging Iran-Contra Affair became public in late 1986. Charges that the Reagan administration had secretly sold arms to Iran and used profits from the sale to aid an insurgency in Nicaragua engulfed Reagan in the worst political scandal since Watergate. Congress prohibited aid to the contras from 1983 to 1986. Reagan’s determination to continue this struggle led members of his administration, most notably the National Security Council staff, into a variety of activities including the secret sale of arms to Iran and the clandestine diversion of profits to the contras. Reagan claimed not to have known of the diversion and a review board condemned his "management style" as inept. Senate hearings began in 1987. Those indicted were the National Security Council's John M. Poindexter and Lieutenant Colonel Oliver North. During North's trial in 1989 a document released by the defense suggested that both Reagan and Bush had been involved in an undercover scheme to secure outside aid for the contras in exchange for military-economic support for Honduras. By 1990 six former Reagan officials had been convicted in the affair. In eight hours of videotaped testimony about the arms plot, the former president repeatedly swore, "I don't recall."

President Reagan endured many health problems while in office. For eight hours on July 13, 1985, while Reagan was undergoing intestinal surgery, he formally transferred the power of his office to Vice-President Bush. It was the first time anyone had been designated acting president of the United States. Also, he had a cancerous growth removed during the operation. In 1987 Reagan once again underwent minor surgeries for urinary tract blockage, intestinal polyps, and a cancerous growth on his nose.

The national economy mirrored the contrast between the President’s upbeat mood and his recurring ailments. Job expansion and steady economic growth overcast worrisome trends. There were huge trade deficits and a 1985 budget deficit of $211 billion. In November 1986, the Democrats took control of the Senate by a wide margin. Reagan’s domestic policy agenda was depleted.

After a fumbling performance at the second summit conference with Soviet leader Gorbachev in Iceland, October 1986, doubts were intensified concerning the abilities of the now 75 year old President. Through his persistence in promoting his “Star Wars” initiative, it appeared that an agreement to reduce nuclear missiles would not occur. However, in December 1987, Reagan and Gorbachev meeting in Washington, DC, solved some of the differences and signed an agreement eliminating medium-range missiles in Europe. In late May 1988 in Moscow, they met once again and signed ratification documents of a treaty on intermediate and short-range missiles.

Prior to leaving office, Reagan created a 14th Cabinet department for veterans' affairs. Also, as part of a major anti-drug legislation he created the Cabinet-level post of "drug czar", Director of the Office of National Drug Control Policy. With Reagan’s popularity rating once again high, he helped to secure the election of his Vice President, George Bush to the Presidency on November 8, 1988.

The Reagan years saw the restoration of prosperity to the Nation. His goal of ‘peace through strength’ seemed to within reach. At the end of his two terms in office, Reagan was satisfied that his program to raise the spirits of the American people and reduce their reliance on the Government was a success. He was pleased that he had fulfilled his campaign pledge to restore “the great, confident roar of American progress and growth and optimism.” He had overseen the creation of budget and trade deficits as well as an historic truce in the cold war with the Soviet Union. Reagan was called the Teflon President in that neither the many political scandals regarding his subordinates nor the enormous budget deficits remained related to him. He was considered to be the most conservative nominee to win the office of President in the past fifty years. Although active in political causes throughout his acting career, Reagan did not seek public office until well into later life. He had not dedicated his life to politics or any public service profession. Reagan is the oldest person ever sworn into the office of President. His place in history, however, is yet unclear. During his tenure, the United States was transformed from the world’s leading creditor to the number one debtor when he left office

Reagan and his wife Nancy left Washington and retired to a California estate purchased by friends. His past reputation as “the great communicator” made him much in demand as a speaker. He had left Washington with an approval rating the highest of any President since World War II. The Reagan’s now live in solitude with the former President fighting his greatest battle, Alzheimer disease. His daughter Maureen now champions the cause of Alzheimer’s in many venues and public appearances.