President Rutherford B. Hayes
19th President of the United States

Message of President Rutherford B. Hayes nominating William M. Evarts to be Secretary of State - Courtesy of: National Archives and Records Administration

RUTHERFORD BIRCHARD HAYES was born on October 22, 1822 in Delaware, Ohio, nearly three months after the death of his father, Rutherford Hayes. The elder Hayes had left his native Vermont in 1817 to emigrate to the West, bringing with him his wife, Sophia Birchard of Wilmington, Vermont, his two young children and his wife’s brother, Sardis Birchard. They settled in the town of Delaware, Ohio, where he purchased an interest in a distillery and built a considerable house. He died of the malarial epidemic that swept the region, leaving his wife with a child on the way, to the care of her brother.
Rutherford B. Hayes was a sickly child and when he was three years old, his older brother Lorenzo drowned, leaving his mother very apprehensive of young Rutherford’s health and well-being. She kept him from school in his early childhood and he became timid with an aversion to the rough and mischievous ways of other boys. The boy’s sole companion was his sister Fanny, a bright active tomboy, two years older than himself. When he did attend school, he was an excellent student and gave his teachers no trouble. His uncle Birchard, who had been devoted to the family, took a strong interest in the boy’s schooling and decided to send young Hayes to a tutor in Connecticut where he remained for a year. On his return, he was sent to Kenyon College in Gambier, Ohio and he graduated first in his class in 1842. 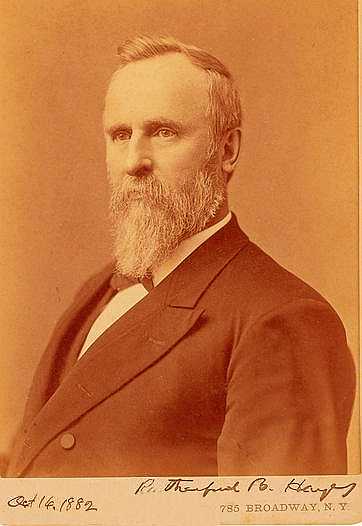 Hayes decided to pursue a law profession and began his studies at the office of Mr. Thomas Sparrow in Columbus. With his uncle’s approval, he attended Harvard Law School and received his degree in 1845. He was admitted to the Ohio bar and went into practice with Ralph P. Buckland in Fremont. This partnership lasted three years. Hayes uncle Sardis Birchard had by this time become a wealthy banker and the Hayes family was benefiting from his wealth. In 1849, young Hayes moved to Cincinnati, where he established his practice and made contact with some of the leading men of the city. He also renewed his friendship with his college schoolmate, Stanley Matthews and entered local politics in the new Republican Party. Within a few years he had made a name for himself as a criminal lawyer. Hayes mother had chosen a girl for him. She was Lucy Ware Webb, whom Hayes had first met at his home in Delaware when she was 15. They became engaged after she was graduated from Wesleyan Female College in Cincinnati and they were married in December 1852. Hayes was then 30 and Lucy, although only 21 was warmhearted, popular and very religious. Their first son, Birchard Austin, was born in 1853. 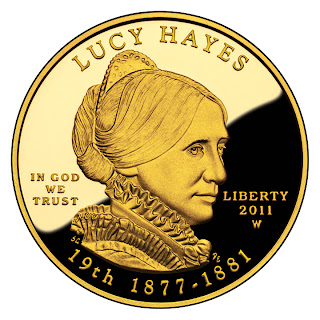 Hayes was a strong supporter of the Union, despite his hopes for a compromise on the issue of the Civil War. When the War broke out, he answered the call for troops in April 1861 and served the Union well for the next four years. He was wounded four times and had four horses shot out from under him. In the spring of 1865 he was placed in command of an expedition against Lynchburg when the war was brought to a close by Lee’s surrender.

Hayes was nominated and elected to Congress while still in the army, but he refused to leave his command until the war was over. He took his seat I the House in December 1865 and was reelected in 1866. He made few speeches and took no part in the debates over reconstruction and always voted along party lines. In 1867 and again in 1869, Hayes was elected Governor of Ohio. He proved a capable and economical administrator, taking great interest in prison reform and in hospitals for the mentally ill. His beloved sister Fanny had been hospitalized more than once for mental illness. 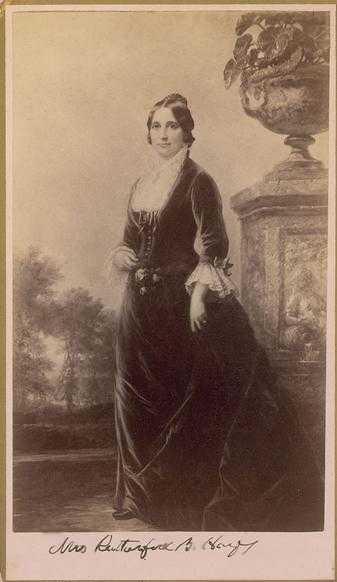 In 1873 Hayes decided he was finished with politics and he retired with is family to his uncle’s house, Spiegel Grove, in Fremont. His uncle died the following year and left the bulk of his large estate (mostly land) to Hayes. The Hayeses now had five children (three had died in childhood). The oldest boys, Birchard, Webb and Rutherford were at college. At home were Fanny, seven and Scott Russell, four. Hayes was the leading citizen of Fremont and was listed in the directory as a “capitalist”. His retirement was brief, however, after one year he was persuaded to run for Congress. He was defeated, but he ran again, this time for Governor of Ohio in 1875. Hayes defeated Democratic Governor William Allen, but only by 5,500 votes out of nearly 600,000 cast. Although his victory was narrow, his success made him a strong presidential possibility in 1876. The Republican Party liked him for many reasons, his integrity being one, and Hayes himself thought he had a good chance and actively sought and received their nomination.

Hayes Democratic opponent in 1876 was Samuel J. Tilden, the Governor of New York. When the election returns were counted, Tilden had won the popular vote by about 247,448 out of a total cast of 8,320,592. However, both men claimed an electoral vote victory. There had been a controversy pending for some time in Congress regarding the manner that the Electoral votes of several states were counted and declared. The dispute was settled by the appointment of the Electoral Commission of 1877. On March 2, 1877, the result of the proceedings was the declaration of Rutherford B. Hayes by a vote of 185 electoral votes to Tilden’s 184. 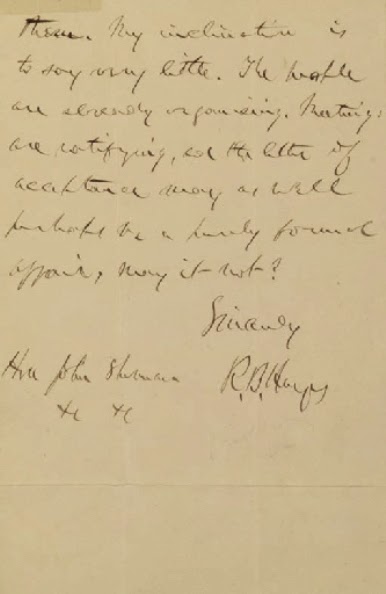 On March 5, 1877, Hayes was inaugurated. He realized that the presidency was weak and the Congress strong, and he did not please many legislators with the tone of his inauguration speech. “He serves his party best who serves his country best” was his much-quoted statement. In April the last of the federal troops were withdrawn from the South and the long period of reconstruction after the Civil War was finally ended.

In June 1877, Hayes issued an executive order directing federal workers not to take part in the management of political parties and campaigns and forbade the parties to demand contributions from federal employees. His administration uncovered a civil service scandal in the New York Custom House. Many of its employees (Chester a. Arthur, later president of the United States, and Alonzo B. Cornell, later Governor of New York, among them) ignored their jobs and worked instead at Republican Party politics. Hayes sponsored a bill in Congress for broad civil service reform and although the bill was defeated, it brought public awareness to the need for reform.

Hayes firmness and disregard of all matters but those of principle and conviction were displayed on many occasions. His purity of purpose, courage and consistency were rarely questioned, but his Democratic opposition was bitter and the support of Republicans was at best mediocre. He opposed the reelection of Presidents and affirmed his not being a candidate for reelection under any circumstances. He advocated an amendment to the constitution extending the president’s term to six years and prohibiting reelections. At the end of his term, Hayes retired quietly to his home in Fremont, Ohio. His public career ended with his retirement and he led a tranquil life, appearing as a distinguished guest at many public celebrations and reunions.

Hayes died on January 17, 1893 at Spiegel Grove, his home in Fremont, Ohio, after suffering an apparent heart attack.