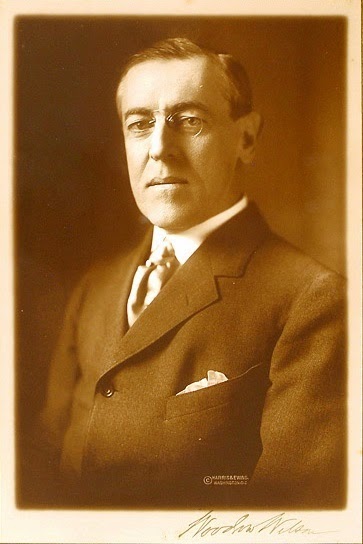 28th President of the United States

Students and Teachers of US History this is a video of Stanley and Christopher Klos presenting America's Four United Republics Curriculum at the University of Pennsylvania's Wharton School. The December 2015 video was an impromptu capture by a member of the audience of Penn students, professors and guests that numbered about 200.

Be Sure to Visit The Woodrow Wilson House 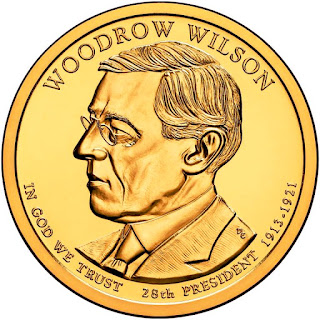 
THOMAS WOODROW WILSON was born in Staunton, Virginia on December 28, 1856. He was the first son and third child of Joseph Ruggles Wilson, a Presbyterian minister, and Jessie Janet Woodrow. In 1859 the family moved when the elder Wilson was named pastor of a church in Augusta, Georgia. The Civil War was difficult as Dr. Wilson was an ardent Confederate sympathizer, and young Wilson witnessed the ruthless behavior of General William T. Sherman’s federal troops who invaded Georgia and South Carolina, and he remained an ardent Southerner throughout his lifetime.


Young Wilson was educated at home and at private schools in Augusta and Columbia, South Carolina, where the Wilsons moved when Dr. Wilson accepted a position as a professor. In 1873 they moved again, to Wilmington, North Carolina where Wilson attended Davidson College, a small Presbyterian school where his father was a trustee. The following year he enrolled at the College of New Jersey (now Princeton University), where he pursued his interest in English literature and politics. He studied the classic orators and the techniques of public speech and was a leader among the school debaters. His vision of entering national politics was revealed in his visiting cards, which was written "Thomas Woodrow Wilson, senator from Virginia." During his senior year at college he dropped the 'Thomas' from his name and he published an essay, "Cabinet Government in the United States," in the International Review (August 1879). The essay revealed his gift for embellishing ideas and giving them simple and urgent form. He envisioned a government of strong and competent legislators rather than a strong president, and he was encouraged by the excellent reception his essay received He decided to become a lawyer and enter politics and he enrolled in the University of Virginia law school. However, he became inpatient with the fine points of law as he found public speaking and political history more satisfying. He received his law degree and in 1882 settled in Atlanta, Georgia, where he opened a law office with Edward I. Renick, another idealistic young Southerner. However, neither Renick nor Wilson were skilled at the business side of their venture, and in 1883 Wilson relinquished his law career and entered the graduate school of The Johns Hopkins University to study history.


At John Hopkins, Wilson’s mentor, Professor Herbert Baxter Adams permitted him to continue to analyze politics. The result was a book-length expansion of his earlier essay which was accepted and published early in 1885. Congressional Government earned Wilson his Ph.D. degree and enabled him to pursue a literary and academic career.

At that time, he also accepted a position with the newly opened Bryn Mawr College, a school for women near Philadelphia, where he taught and pursued his writing for the next three years. In 1888 he accepted a professorship in history and political economy at Wesleyan University in Connecticut. There, in 1889, he published a lengthy textbook analyzing the political nature of society, The State. In 1890 he was offered and accepted a professorship at his alma mater, the College of New Jersey. He began a program of publishing and public appearances and became one of the leading academic personalities of the era. His essays appeared in many magazines and he brought an excitement to his subjects that stirred his students, his colleagues, and the outside reader. He seemed to have abandoned any hope for a political career, but he continued to follow political affairs. Responding to the strong demand for his work, he wrote A History of the American People, published in five volumes in 1902 and his name became familiar and respected.

Wilson was unanimously elected to the presidency of the college in 1902, which had now become Princeton University. During his tenure as president, his innovation and reforms brought wide impact on national university education.

In 1909 Wilson's progressive approach to education attracted the attention of the Democratic political machine. They helped elect him Governor of New Jersey, but learned to regret it when he ended up cleaning house and riding the state house of corruption. Success in New Jersey made him a contender for the Democratic presidential nomination. Although he entered the 1912 Democratic National Convention a poor second to Speaker of the House Champ Clark, he won the nomination after 46 ballots. Offering a program of reform he called the New Freedom, Wilson ran against a divided Republican party. In November, Wilson won only 41.85 percent of the popular vote but polled 435 electoral votes, compared with Roosevelt's 88 and President Taft's 8.

With a Democratic majority in Congress, Wilson pushed through many reforms, including the graduated income tax, a lower tariff, laws restricting child labor and the Federal Reserve Act. However, he proved to be less decisive on other reform issues. He had little confidence in the ability of women to vote and participate in politics, but for political reasons he was slow to oppose the determined suffragettes. Similarly, he fought for the child labor law with obvious reluctance and supported the Adamson Act only to head off a threatened strike by railroad workers. Wilson’s most obvious failure at reform was his policy toward blacks. Segregation had never been the custom in federal government offices in Washington, D.C. However, faced with strong pressure from his fellow Southerners, Wilson allowed segregation in the capital. Challenged with his vague promises before election that he would treat blacks with fairness, he could only say that the new policy of segregation was in the best interests of blacks and he would angrily end the interview when he was disputed.

Wilson suffered a severe personal loss on August 6, 1914, with the death of his wife. Combined with the sickness and tension that had plagued him for most of his life, her death was almost more than he could bear. He sought solace in more intensive work and leaned heavily on his few friends. The following year he met Edith Bolling Galt, a southerner and the widow of a Washington jeweler. She and Wilson were married on December 18, 1915.

In 1916, the war in Europe was the major issue of the day. Wilson opposed intervention and narrowly won re-election. Soon after, Germany’s mounting aggression against the United States forced Wilson to declare war, to “make the world safe for democracy.” 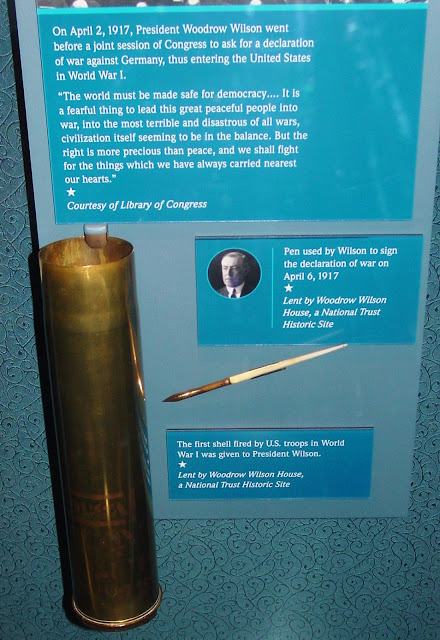 After the Allied victory, Wilson’s “Fourteen Points” peace plan paved the way for the creation of the League of Nations. Against the advisement of his doctor, Wilson set out on a national tour to generate public demand for ratification of the League. The physical strain was too great for his frail body. He nearly collapsed following a speech at Pueblo, Colo., on September 25, 1919. He returned to Washington, and suffered a severe stroke and paralysis of the left side on October 2. He never fully recovered. On November 19 the Republican controlled Senate rejected the League’s Treaty of Versailles. Wilson's stroke left him physically incapacitated but his condition was not made public. Mrs. Wilson jealously guarded her husband, and most likely feared that his resignation would sap his will to live. To her he was "first my beloved husband whose life I was trying to save ... after that he was the president of the United States." As a result, his Cabinet members were denied access to him. His wife decided what printed materials he could see, and his state papers became few and unsatisfactory.

The Democratic Party, at its 1920 convention, bestowed lavish praise on Wilson, who was awarded the Nobel Peace Prize for 1919, but decided to nominate James M. Cox for president.