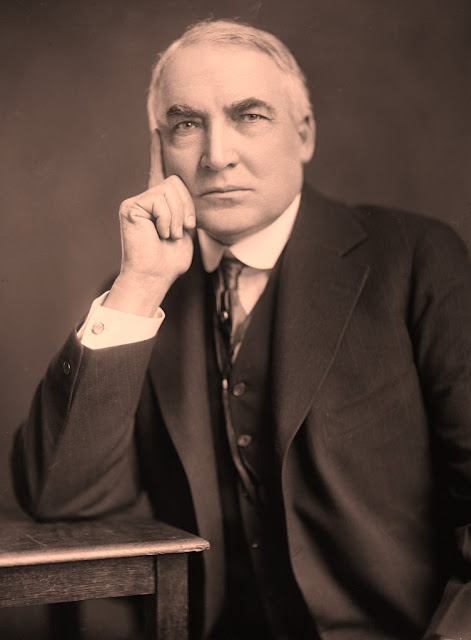 29th President of the United States

Under the Constitution of 1787 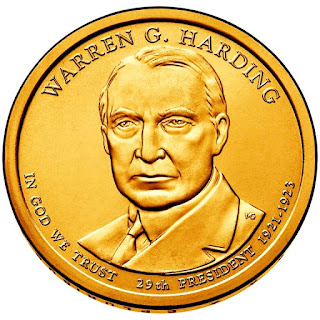 WARREN GAMALIEL HARDING was born on November 2, 1865, in Blooming Grove near Corsica, Ohio, the first child of George Tryon Harding II, and Phoebe Dickerson. The elder Harding was a Civil War veteran, farmer, horse trader, and later rural doctor who was descended from the English Puritan Richard Harding, who came to New England in 1623. His wife, Phoebe, out of financial necessity was a midwife and was quite religious. The family moved to nearby Caledonia, where young Harding went to school, played the cornet in the village band and worked for a time for his father at the local newspaper, the Caledonia Argus, as a printer’s devil, showing no enthusiasm for farm work. In 1879, at the age of 14, he entered Ohio Central College, spending his vacation time working on the family farm, at the local sawmill and briefly on the Toledo and Ohio Central Railroad. Shortly before his graduation in 1882, the family moved to Marion, Ohio, which was to become Harding’s lifelong home.


In Marion, he studied law, sold insurance, and taught school, but he didn't enjoy any of these. Finally, because he had managed his college newspaper and had previously worked at the Argus, young Harding took a job as a printer, pressman, and reporter at the Marion Democratic Mirror. In 1884, together with a friend, Harding bought an unsuccessful four-page newspaper, the Marion Star, and as the town grew so did their paper. Harding bought out his partner and on July 8, 1891, when he was 26 years old, he married a wealthy widow, Mrs. Florence Kling De Wolfe, who was five years his senior. The new Mrs. Harding was the daughter of Marion’s leading banker and with her assistance the weekly Star became an influential daily newspaper.


Not so robust as he seemed, Harding as a young man had several nervous breakdowns. His wife, the Duchess--as he referred to her – was also neurasthenic and formidably domineering. She brought him very little domestic happiness, and he established relationships with other women. His most enduring affair was with Carrie Phillips, the wife of a Marion merchant, with whom he maintained a liaison from 1905 to 1920.


In 1917, Harding formed a relationship with Nan Britton, an impetuous young woman from Marion who was 31 years his junior. She visited him from time to time in Washington when he was a senator and even in the White House. Their daughter Elizabeth Ann Christian was born in 1919.

In the 1890s Harding enlarged his social and business connections in Marion. He joined the Masons, the Elks, and other fraternal orders. He served as a director of the Marion County Bank, the Marion County Telephone Company, and Marion Lumber Company, and he was a trustee of the Trinity Baptist Church. Harding developed a knack for public speaking. He found he could captivate the audiences of his day with his mellow delivery. He came to the attention of Harry M. Daughtery, an Ohio lobbyist and political manipulator. After an early defeat for county auditor, Harding was elected as the Republican state senator in 1899. He quickly became one of the most popular senators in Columbus. During his second term he was chosen Republican floor leader, and at its conclusion he was elected in 1902 to the figurehead post of lieutenant governor.


In 1914 he was chosen as candidate for the U. S. Senate to oppose the Irish-Catholic Democratic attorney general, Timothy S. Hogan. Although Harding himself refused to exploit Hogan's religion, his followers played up the issue of propery so successfully in rural Ohio that Harding won easily.


In his six years in the Senate, Harding was a friendly nonentity--genial, a noted poker player, and much in demand as a speaker. No bill of any consequence bore his name, nor did he champion any measure worth recalling. Long before the Republican convention of 1920, Harding's mentor, Daughterty, persuaded the reluctant senator to announce his candidacy and to appoint him political manager. Daugherty toured the country to secure the support of Republican leaders for Harding as a candidate. Harding was nominated on the 10th ballot. He waged a "front porch" campaign, straddling the chief issue of the League of Nations with vague rhetoric. He won 404 electoral votes to 127 for his Democratic opponent, James M. Cox, and 16,153,785 popular votes to Cox's 9,147,353.

During Harding’s term, the White House took on the laidback atmosphere of his frequent poker evenings. Corruption grew blatantly -- in the Department of Justice, in the Bureau of Investigation, in the Prohibition Bureau of the Treasury Department, and in the Veterans' Bureau. Harding followed the congressional Republicans’ lead, approving bills that cut taxes, raised tariffs, ended wartime controls and restricted immigration. In the two years following his election, the country seemed to be on the road to prosperity. Then, on August 2, 1923, during a campaign visit to San Francisco, Harding died suddenly of a heart attack and the nation was stunned by revelations of widespread corruption in his Administration.